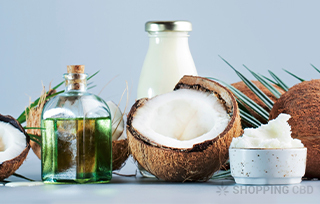 If you read the ingredients on your favorite CBD products, you will probably notice a pattern. The majority of your consumable CBD products have MCT oil listed within the ingredients. Sometimes, MCT oil is listed as ‘MCT oil (coconut oil)’, and other times, it may say something like ‘MCT coconut oil’.

Most of us will gloss over MCT oil in the ingredient list, assuming that it is no more than a simple addition to CBD oil and other products. This is not the case, though, as MCT oil is thought to have health benefits even when not combined with CBD.

So, what exactly is MCT oil, and how can it benefit you? Let’s find out. 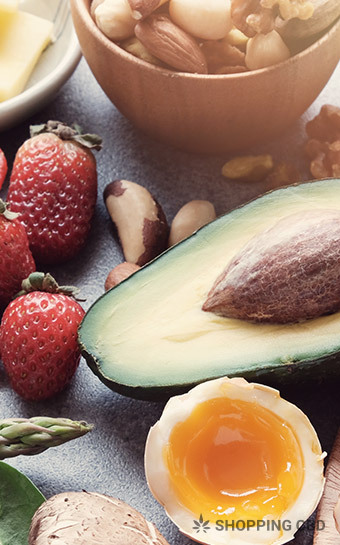 What Is MCT Oil?

MCT stands for medium-chain triglycerides (fatty acids), and is a type of fat that is found in certain oils, as well as dairy products. The two most common oils that contain MCTs are coconut and palm kernel oil. This is why coconut oil is so widely used in CBD products. Other sources of MCT include milk and butter.

The majority of the fats that we eat as part of our regular diet are classified as long-chain fatty acids, made up of between 13 and 21 carbon atoms. Short-chains fatty acids, on the other hand, contain less than six carbon atoms and are not commonly found within foods.

Medium-chain triglycerides are fatty acids that are made up of between 6 and 12 carbon atoms and are believed to be processed by the body in a different way to long-chain fatty acids. Unlike the rest of the fat that enters our body, MCTs are transported straight from the gut to the liver, where they are turned into ketones.

Ketones occur when the body breaks down large amounts of fat in the liver and can be used in place of glucose. As medium-chain triglycerides are processed in the liver and are much easier to break down, they are much more likely to become ketones than long-chain fatty acids.

MCT oil is thought to have a number of different health benefits and is often used as a dietary supplement. MCT oil can also be added to CBD products in order to give them an extra health boost, while also making them more appealing when compared to CBD products that do not include MCT oil.

So, what are some of the potential health benefits of using MCT oil as a supplement?

MCT oil is often advertised as being beneficial to those who are trying to lose weight. There are a few different factors to take into account when trying to decide whether MCT oil could help you meet your weight loss goal.

A number of studies have shown that medium-chain fatty acids increase the release of hormones that control our appetite. Leptin and peptide YY are two of the hormones that control how hungry you feel. When leptin and peptide YY are increased, you are less likely to feel hungry and should, in turn, eat less. MCT oil increases the rate at which both hormones are created, forming a misconception that MCT oil is an appetite suppressant.

Like all fats, MCTs contain calories; but unlike other fats, they are used straight away rather than being stored for later use. The way that the body uses MCTs means that they are much less likely to be stored as fat, decreasing the chance of weight gain.

Switching your traditional cooking oil to an MCT oil such as coconut oil could prevent your body from storing as many calories after a meal. MCT oils have also been found to contain up to 10% fewer calories than long-chain triglycerides, meaning that you are putting fewer calories into your body to start with.

MCT oils are processed much faster by the body than long-chain triglycerides, making them an almost instant source of energy that your body can use. MCT oils can also be converted into ketones in the liver, which are then used as brain fuel.

It is thought that medium-chain fatty acids are able to be processed into energy much more efficiently than long-chain fatty acids, resulting in increased energy levels. MCT oils are often used as a dietary supplement for athletes, providing them with the energy that they need while training.

MCT oils have also become popular among athletes as they are thought to help the body use fat as a source of energy rather than carbs. It remains unclear precisely what link there is between increased performance and MCT oil’s ability to increase the rate of fat burning within the body.

Medium-chain triglycerides are thought to help the body process glucose, lowering blood sugar levels in those with diabetes. As MCT oil also increases the rate at which fat is burnt within the body, it can help with weight loss, further reducing your risk of diabetes.

Medium-chain triglycerides have the potential to alter the way that the body manages cholesterol levels. Studies have shown that MCT could help to reduce levels of bad cholesterol while also increasing good cholesterol.

High levels of bad cholesterol in the body can cause heart disease, as well as other heart-related conditions. MCT oil is thought to promote weight gain, another factor that increases a person’s risk of heart disease. Including MCT oil into your supplement routine could help to reduce your risk of heart problems later in life.

Are There Any Risks to Taking MCT Oil as a Supplement?

MCT oil is an entirely natural supplement that is found in both oils and dairy products; for this reason, it is thought to be a low-risk supplement option. Most people will consume MCT oils as part of their regular diet without even realizing it.

While MCT oil might not directly pose a risk to your health, it can cause some unpredictable effects that you might not have thought possible when deciding to make it part of your supplement routine.

Top of the list is MCT oil’s ability to increase hunger hormones, despite it being used as a natural way to support weight loss. Some studies have shown that MCT oil can increase the release of ghrelin and neuropeptide, two hormones that increase appetite.

There have even been cases where MCT oil has been used as part of a treatment plan for those with anorexia. The exact effect that MCT oil has on the body’s hunger hormones is still not fully understood, with there being little explanation as to what determines whether it increases or decreases a person’s appetite.

As MCT oils are directed straight to the liver where they are processed, there has been some concern as to the long term effects this can have on a person’s liver. One study which involved people taking a higher than the recommended dose of MCT oil on a regular basis found that their levels of liver fat increased.

This again demonstrates that much more research is needed in order to fully understand the long term benefits of using MCT oils as a supplement, rather than just as another part of a balanced diet.

Some people have found that taking a regular dose of MCT oil caused short term stomach problems. It is not clear if stomach problems were the result of a sudden increase in fat within the body, or if some people are simply not able to process large amounts of medium-chain triglycerides.

In most cases, people found that they returned to normal once they stopped using MCT oil as a dietary supplement.

Medium-chain triglycerides have always been part of a balanced diet, with dairy and coconut oil being common ingredients used throughout the world. It is not until recently, though, that people have started to look towards MCT oils as a food supplement, increasing their levels of MCT oil in a way that would not be possible with a regular diet.

There is currently very little research regarding the effect that MCT oil can have on a person’s health. While most research does point towards MCT oil having a positive impact on a person’s health, there needs to be more detailed and varied studies carried out before anyone can reach a conclusive verdict.

CBD products that contain MCT oil typically only carry a minimal amount, similar to the level that you might find in a dish that has been made using coconut oil. Such small amounts of MCT oil are unlikely to have a drastic effect on your health, with most studies instead focusing on pure MCT oil supplements where levels are higher. 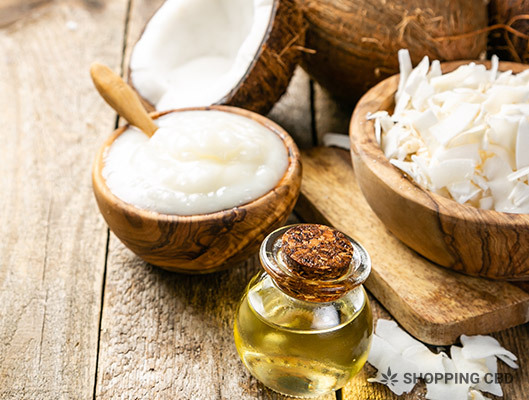